Houston area employers added 97,700 jobs to their payrolls during the past 12 months, the Texas Workforce Commission reported Friday. That represents a 3.6 percent increase between July 2012 and July 2013.

The commission also reported that the local unemployment rate dipped to 6.5 percent for July.

The local jobless rate, which is not adjusted for seasonal factors such as school schedules and holidays which affect retail and hospitality hiring, was 6.7 percent in June.

The statewide data, however, is seasonally adjusted and in Texas, the unemployment rate held steady in July at 6.5 percent.

In Texas, the sector that added the most jobs last month was financial services. The sector, which suffered during the housing and credit collapse during the most recent downturn, appears to be in the recovery mode.

The gain of 9,000 jobs in finance during July was the largest monthly increase since 1998, according to commission records.

It was the sixth monthly gain during the past seven months. 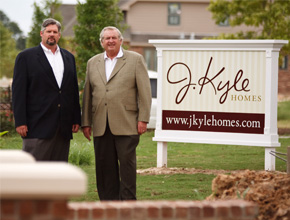 The Creeks at Augusta Pines

Hear what our homeowners have to say.

Learn more about the care we put into your new home.

Promotion of Homes for Sale in Bridgeland, The Woodlands Kicks Off

Halloween Events in The Woodlands & Bridgeland in Cypress

Moving to The Woodlands’ Liberty Branch: Resources to Help

Get in touch with J. Kyle Homes